THEY ARE WISE BEINGS

THEY WILL ASSIST IN HEALING

WE ARE SIRIAN BEINGS

WE ARE NOT EARTH BEINGS

WE ARE IN ORBIT – THIS EARTH

WE WILL ALL TRAVEL TO THE STARS

WE ENTER BY THE STARGATES

WE ARE ALL STAR SISTERS/

IT IS THEIR WISH

THAT THE HATE THAT

HAS RISEN IN THE EARTH

IS LAIN TO REST

THEY WISH TO SING IN A

THE ONE NOTE IS IN THE STONES

IT IS NOT LOST

ISIS/OSIRIS WILL NOT LOSE THE

WE SENT THE LETTERS

THE LETTERS ARE AT ALL THE SITES

WHERE WE TWIRL THE WHEAT

WE TWIRL THE WHEAT AT SITES

ALL OVER THE EARTH

SET TO BE REBORN

LEARN TO LOVE THE EARTH

BE ONE WITH THE EARTH

THE LOST ISLE WILL RISE

A BIG TWISTER TO HIT EARTH

BE AWARE – WE WILL BE ON

BE AWARE ALSO THAT THERE ARE

ALIEN BASES ON THIS EARTH

THE NEW LAWS – THE NEW WAYS 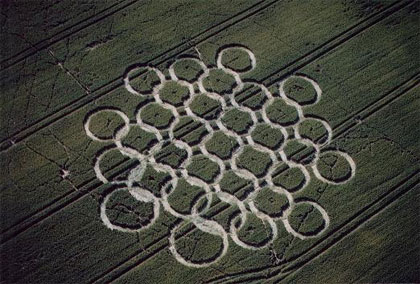 The overriding strength and integrity of these communications in my opinion lies in their consistency of content in concert with vast amounts of repetition of parts of the text throughout the entire set. These repetitions are a clear sign in my mind that they are not a random occurrence but have been deliberately placed within the confines of these place names. The wide repetition scattered as seeds amongst so many place names ensures that I would at least find some of them in my search.

Clearly singularly unafraid of controversy, our extraterrestrial communicants make another bold statement here. Let me remind you once again that each word of this statement is contained, along with the rest of the message, within the confines of the place name. It was there to be found. The sentiment is entirely theirs, however much I happen to concur with it. Apart from rights of territory and sovereignty, this statement has interest in highlighting a deep sense of spirituality and universal connection experienced and expressed by the Tibetan people.

They are the modern face of a very ancient race. The important if overlooked key fact about Tibetans is that they still have the sacred knowledge and wisdom of their ancestors alive and active in their lives today. This knowledge and their ability to use it, in my opinion, is the greatest threat to their oppressors. However, it need not be a threat. It is in no one’s long-term interest to suppress the Tibetan people’s ability to be Tibetan. The land that is Tibet may be disputed and occupied but it will always be Tibet.

I go further and state that it is imperative according to my information, that the restoration of the Tibetan people to their homeland under a system of self-rule is absolutely essential if the greater universal balance is to be restored – hence the Circle Makers’ statement here. You may take the Tibetan out of Tibet but I do not believe you will ever take Tibet out of the Tibetan.

Do not forget about the vibrational frequencies that govern us. We are who we are despite anyone’s attempts to change us. The Tibetan plateau is also the centre for exceptionally powerful planetary forces unique upon this world; a particularly spiritual and sacred place, too powerful and potent perhaps for some of its neighbours to resist stamping their own authority on it. Claiming the right to territory is one thing, however this may be justified, but claiming the right to assimilate a culture because you fear it is quite another and is totally unacceptable.

Many of us are painfully and acutely aware of the injustice meted out to the Tibetan people and are actively seeking ways to redress the balance, however it is a great task with a formidable opponent to convince, making this statement even more intriguing.

Hyper-dimensional portals. Doorways between worlds. Allowing access to and from different dimensional or other physical realities. It should be no surprise that highly advanced extraterrestrial beings have access to such devices (whether a physical object or an etheric/cosmic pathway). The Letters indicate that there are many stargates on Earth, in line with the long held suspicion of many UFO researchers.

Not exactly cryptic or abstract per se but a highly unusual statement nevertheless considering the senders claim to be from another world. It is easy to let one’s mind slip out of reality mode and consider it all to be no more than science fiction or an elaborate hoax of some sort. I assure you that it is neither. If the Letters were no more than science fiction, this would imply a work of such enormous creativity on my part that I would almost have had to create the 26 letter alphabet and much of the English language single-handed. You can be certain that I am not that creative.

I reiterate the point I made earlier that I would not have found these Letters if they had not been there to find. I certainly admit to being a creative person with finely developed intuitive abilities. It is through the application of these abilities that I am able to locate and decode these communications. Were I perpetuating an elaborate hoax upon the world, I would still have had to create the alphabet and English language in order to manipulate it to my own devices and considering the length of time the English language has been evolving, this could not be even remotely possible.

The ingenuity required to create and operate a system which can encode secret extraterrestrial messages in this manner is, I am certain, beyond the capability of anyone on this planet today. How the system was conceived in antiquity and the Letters set in place for retrieval today is one more enigma that the crop circle phenomenon has presented to us. However, I readily concede that the method of communication is far from ordinary and will cause many to wonder about the authenticity of such material. For my part, I have chosen to bring these communications to light at this time. I ask that you study these texts with discernment and come to your own conclusions about their authenticity. They must speak directly to you, as they did to me when I found them. That is their purpose.