ANIMALS CAN BE CURED

IN A SACRED MARRIAGE WE CAN

SING AND DANCE IN A MAGIC RING

Wandlebury Rings is an ancient sacred site in Cambridgeshire (a hill-fort of concentric earthworks), and a part of the Gog Magog Hills. On the 11 July 2001 and 25 July 2001 respectively, the fields below this ancient druidic site played host to two exquisite crop formations – The Maze/Pyramid set with its 666ft. encompassing ring (constructed in two stages a week apart), and The Angel. Sacred sites by their nature are highly charged vortices, magnetically attractive to the human psyche, drawing many to them to commune with cosmic essence. Each in their turn re-fuelling the ‘cosmic fire’ with their own energies.

Sadly, many sacred sites are in a state of neglect and their potent energies diminished. Therefore, it is interesting to note the interaction with these sites on a grand scale once again (particularly the lesser known, least visited ones) as a direct result of the phenomenon. Drawn to sacred sites, we marvel at the fantastic cosmic artistry laid in the wheat and barley but we also assist in the re-energising of the site. Where we gather in love and harmony, we sanctify that place.

In stark contrast to the loving, harmonic re-energising of the planet, Wars destabilise, disrupt and destroy and the Circle Makers’ message could not be clearer or more appropriate. It is time to embrace wisdom instead of fear.

Here the Circle Makers have referenced the Ancient Egyptian Sun God of Heliopolis, RA (aka.RE – state deity in the 5th Dynasty). Ancient Egyptians revered the bounty and manifestations of nature. They were aware that life depended on the sun, and they worshipped it in a variety of ways. The cult of RA/RE was one of these ways, and it was based at Heliopolis (Greek name meaning ‘City of the Sun’). The Sun-God RA became, and remains today, one of Egypt’s most important deities.

The idea or nature of the Sacred Marriage, the Hieros Gamos, is in the conjoining of two divine principles – the masculine essence with that of the feminine. All marriages in that sense are sacred, whether sanctioned with the official stamp of state, religious approval, common law or otherwise. In the context of this message I deduce that the Sacred Marriage referred to relates in part or whole to Isis and Osiris (whether literally or symbolically) and their predicted return to Earth. It is also likely to relate to the sacred marriage of spirit and matter, the new state of conscious awareness also alluded to in the transcripts. 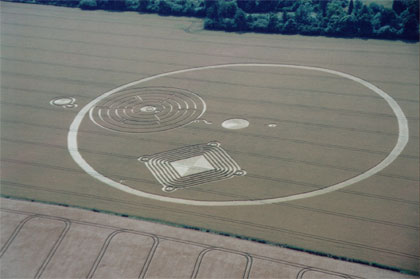 This statement relates to the powerful feminine energy line that parallels the equally powerful St. Michael alignment. Running from the most western tip of Cornwall to the eastern coast of East Anglia in the United Kingdom, both the Michael and Mary lines pass through or pass nearby to almost every sacred site in this part of Southern England. Both lines roughly trace the path of the other as they snake their way across the country but there are certain places where they cross over each other, creating natural vortices of potent cosmic/earth energy.

Notably, one of these places is in and around Avebury Henge and Silbury Hill, the heartland of ancient sacred Britain. Sweeping out in a great loop on the approach to this magical area, both lines cross dramatically atop Windmill Hill and again at Avebury Henge (sacred marriage). Continuing on their paths, the Mary line sweeps out again to flow directly through Silbury Hill while the Michael line travels straight on to the end of the long serpentine Avenue. There the Mary line rejoins and converges with the Michael line at The Sanctuary.

As the lines approach Cambridgeshire, the Mary line once again loops out to pass through the hills of Gog and Magog and right through the middle of the central enclosure at Wandlebury Rings. (See: Hamish Miller and Paul Broadhurst, The Sun and The Serpent, Pendragon Press 1989). An edited transcript from the Gog Magog Hills follows in the next chapter: UK Transcript Extracts, and was decoded due to the fact that these Cambridgeshire formations appeared in the vicinity where both Place Names were applicable.