SEE SIRIAN ART AT THIS SITE

SEE THE LETTERS WE SENT

THERE ARE ANSWERS IN THE LETTERS

WE SEE A RISE IN AWARENESS ON EARTH

LEARN NOW – WHO WE ARE

ALL SIRIANS WISH TO ASSIST EARTH

IT IS TIME TO SET THE NEW ERA IN MOTION

WITH NEW SKILLS TO HEAL

ALL WILL BE WELL

ISIS WILL START THE WHEEL

BE AWARE – ATLANTIS WILL RISE

THE SEAS RISE WITH IT

LIBERATE TIBET – IT IS WISE

SEE THE SITE AT SIBSON

WE WILL SHOW THEM MORE SIRIAN ART

TALK TO SIRIANS AT ALL THESE SITES

WE WILL MEET SOON 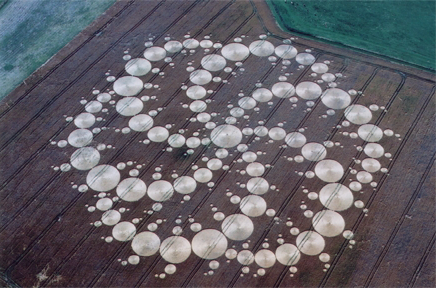 Possibly the highest hill in England, Milk Hill with its shining White Horse carved into the hillside, has been the site of many spectacular crop formations in recent years. On 12 August 2001, the resplendent wheat field atop Milk Hill was graced with one of the most incredible crop circles ever seen, with the appearance of the fabulous ‘Solar Wheel’. A majestic array of 409 circles congregated to create one of the largest, utterly breathtaking formations to date, at approximately 748 feet in diameter.

Even the known ‘land artists’, to my knowledge, were quite prepared to step back, disclaim involvement and simply marvel in wonder and awe with the rest of us. The pattern was so vast and spread out in every direction, that finding the centre of it was more a matter of luck than design. The hilltop is wildly undulating, dipping here and rising there (not immediately obvious from aerial photographs), but this perfect pattern was neither phased, nor warped by the topography of its canvas.

The description of this formation as the ‘Solar Wheel’ is deeply intriguing and clearly open to interpretation, possibly many layers of interpretation. As the Circle Makers have not chosen to elaborate on any specific meaning i.e. in relation to solar activity or esoteric importance, at this time, this particular aspect of the Transcript will remain as work in progress, and I invite any thoughts my readers may have on the subject. I will refrain from offering any personal view, except to draw your attention back to the association of the Sun as Logos (deity) to the ancient Egyptians. . .and that ISIS WILL START THE WHEEL.

Another example of stunning Sirian artistry appeared at the foot of Milk Hill, below and facing the White Horse, on 26 June 2004. This ‘insectoid’ formation clearly resembled the shape of a very large ‘Bee’. The exquisite pattern had a definitive 3D quality to it, making the ‘insect’ appear to be over-flying the field, rather than the flat 2D reality that it actually is. The quality shines forth like a beacon. 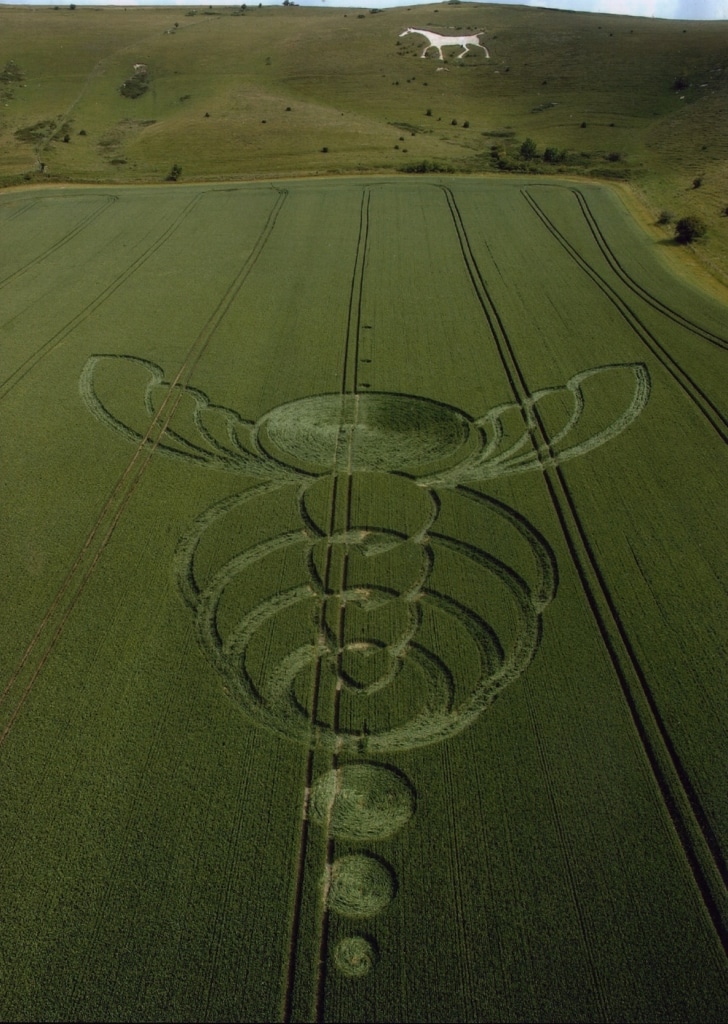 The meaning, once again though, is rather obscure. Interpretations of this important symbol were wide-ranging, but I would like to pay respect to one particular researcher who likened the pattern to the shape of the Caduceus, the symbol for medicine and healing (see Karen Douglas: Is It a Bee?, www.cropcircleconnector.com, June 2004). This association is really quite apt when considering the bountiful healing quality of honey.

In traditional natural medicine, and in conventional clinical treatments, honey is used to cure many ailments, and acts as a natural quick healing agent after surgery, internally and externally. The archetypal/symbolic relationships of bees, is one of wisdom and constructive labour. As the bee extracts pollen from the flowers, so too, might we extract wisdom from the experiences of daily life. The hard-working bee produces the only natural substance that cannot be replicated in a laboratory (there is no such thing as a honey substitute), and are duly rewarded with the fruits of their labour.

Alongside the many revered animals and insects of the ancient Egyptians, the ‘Bee’ is clearly represented and may in fact be symbolic of the Gods themselves. The term ‘queen bee’ comes to mind rather readily but I will refrain once again from making too much of it. Speculation is all very well in its own way, but the responsibility of authorship cautions one against its overuse. Suffice to say then, the bee can be seen to adorn the golden funery beds of ancient Egyptian queens.

See The Site At Sibson

There is an ongoing research project, involving researchers Michael Green, former Chairman and President of the Centre for Crop Circle Studies (now sadly disbanded) and Jim Lyons (former CCCS Scientific and Field officer) amongst others, which is specifically targeting one of the crop circle sites in the United Kingdom; at Sibson in Cambridgeshire.

From their perspective, this is a critical site to study for various reasons, not least of which is the fact that almost every formation that has appeared on this farm over the years has arrived with prior warning. That is to say, on almost every occasion, immediately before a crop circle appears in the field, one particularly sensitive local resident is roused from her sleep by a series of anomalous events, including the flooding of light into her room, with accompanying rapping on windows.

Upon investigation, the lady would witness enormous pillars of light outside her windows, sometimes housing the form of an etheric or semi-etheric being. This column of light would then move away from her house in the direction of the ‘soon-to-be’ latest crop circle at the Sibson site. After several of these events occurred, it was obvious that deliberate communication from the Circle Makers was in effect through that medium, and researchers have closely monitored it ever since.

At least one of the researchers has, in fact, earmarked the site as one which is receiving Sirian symbology in the patterns of the formations that appears there consistently, but in very small numbers. I visited the site myself on one occasion, to assist with field research, and was able to concur that the pattern we measured and investigated that day certainly had a distinctly Sirian flavour to it. Here then, the Circle Makers acknowledge the vigilance and tenacity of the project team, and encourage a continuance of their efforts.

Talk To Sirians At All These Sites

Finally as a parting light, here is a precious gem of a statement from our Sirian communicators. For all those who have a mind to converse with these beings, the path is unambiguously laid out before you. How you may experience them, is for you and you alone to discover, as I did. It is their way – for now.