A DARING PLAN IN MIND

EARTH IS IN DANGER

DAMAGE TO THE EARTH

THIS NEEDS TO STOP

IT IS ESSENTIAL TO LIBERATE

THE DALAI LAMA AND HIS REGION

THE ONE NOTE IS IN THE STONES

IT IS TIME TO RELEASE THE ONE NOTE

HE WILL SING IT

SHE WILL SING IT

SEEN AS GODS LONG AGO IN

MOON EARTH MARS AND OTHER PLANETS 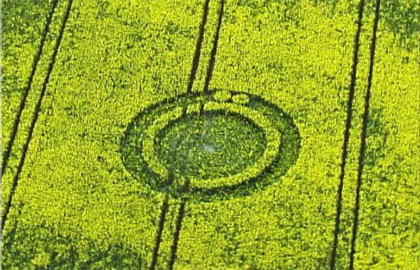 On 12 April 2002, this site played host to the first crop circle of that season. A graceful and elegant, simple circle with an inner-standing ring. The first crop circle often sets some kind of precedent for the rest of the season, and this one was reminiscent of the earliest days of the modern phenomenon when the majority of circles were simple in construction. In those days, people would travel long distances to visit and marvel at the simplest of them. Perhaps then, here we had a gentle reminder that not all patterns must be excessively complicated to have something meaningful to say.

It is important, though, to consider the progressive nature of the phenomenon over the years too as it has evolved from the early simple circles to the breathtaking majesty of the ones we see today. It has become common practice to dismiss many formations because of their complexity. Many assuming that they must be man-made, and that only the simpler patterns are genuine but there is no evidence to suggest such a thing.

Certainly there are ‘land artists’ who can create a reasonable effect on occasions, trampling the crop into patterns with their stomper boards. However, there is a distinct difference between the aesthetics of the genuine pattern, whether simple or complex, and the work of land artists. In a heady mix of maths and mysticism, the Circle Makers, ‘The Real Artists’, have developed the phenomenon, in terms of form, construction and meaning, according to their own design and agenda.

A rare planetary alignment took place during the last week of April and the first two weeks of May 2002, when every planet in our solar system lined up along the elliptical, or pathway of the planets. A press release headline from the Harvard Smithsonian Centre for Astrophysics, dated 3 April 2002, read ‘Caution – Planetary Traffic Jam Ahead’ due to the bumper-to-bumper line up to come. During alignment, every planet in the solar system was visible in a single night across the arc of the sky.

Having de-coded this transcript within days of the circles’ appearance – more than a week before the alignment – it was immediately obvious to me that the Circle Makers deliberately placed this circle at this site, just ahead of the event to remind/inform us of their ‘presence’ in our ‘present’.