FOR A SHORT TIME

PERMITS PATTERNS TO APPEAR IN CROPS

CAROL IS THE CHANNEL FOR THE LETTERS

SHE FASHIONS NOTATIONS AS SHE HEARS THEM –

SPEECH SAME AS HERE ON EARTH

SEE FACES IN CROP NEAR HERE 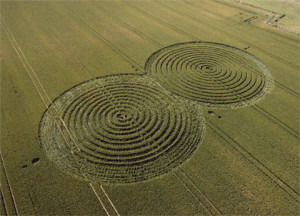 One of the finest examples of its kind, the Double Spiral formation at Fort Nelson in Hampshire, arrived in the summer of 2004, along with several others, just in time for their respective transcripts to be included in this book (the cut off point for this volume of the Sirius Letters. note that the 2005 seasons place names were almost all locked out). More transcripts from the 2004 season follow later with inclusions that I think you will find increasingly interesting, relating to the current political climate.

Controversial as ever, the Circle Makers will no doubt baffle some, irritate others and delight the rest by their statement here, but here it is nevertheless. I sympathise, genuinely, with all exasperated researchers who are desperate to understand the mechanics involved in creating crop circles. I wish them every success in their continuing challenge to answer the numerous confounding questions this mystery brings.

Here the Sirian communicators are attempting to bridge that gap of knowledge, by offering this insight. Is this another occasion when Sci-fi becomes Sci-fact? Are we prepared to consider the possibility that Beings from another world, linked to us in antiquity, are using such methods to create crop circles and enable this indirect mode of communication? The hope here is that this inclusion helps to explain the advanced levels of technological sophistication and cosmic awareness inherent in the patterns. 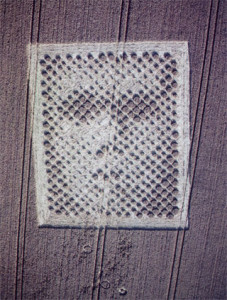 Here these Sirian beings are describing their physical appearance when we eventually see them. In a recent connection with their consciousness stream, I was urged to attempt to explain that these beings are able to manifest in our physical realm even though they exist in a semi-physical form. They will do this by slowing down their personal vibratory frequencies to within acceptable limits for our domain. They will appear to be translucent with remarkable abilities to control the effects of Earth’s combined gravitational and magnetic fields on their bodies. The actual shape of their form is still open for speculation as far as these Letters go.

Other sources have given many descriptions for extraterrestrials from a variety of star systems ranging from denser forms than us to beings of light. Included in this extensive list are the Dogon descriptions of one race of their Sirian forebears as an amphibian species. This may or may not be indicative of their true form. Those who can manipulate their own molecular structure would be viewed as having shapeshifting abilities and could chose bodyforms to suit particular atmospheres. Or it could merely relate to the apparent fact as given by this tribe, that these original Sirians chose to immerse their space craft under water.

Perhaps this was a necessary environment for them when on Earth, simulating an atmospheric pressure in which they could maintain their form and health. Immersed in water, our human bodies weigh only one/sixth of normal body weight, with less than 20% gravitational force exerted on our frames. One reason why hydro-therapy is so popular – and effective.

However, the Dogon drawings of these beings, whom they call the ‘Nommo’, are very specific images of ‘fish-like’ life-forms. They may only be symbolic, but when dealing with such high-strangeness as contemplating the physical appearance of extraterrestrials with shapeshifting abilities, it is probably best to keep an open mind. Irrespective of form, the content of the mind which inhabits that form, is of more importance than its appearance.

See Faces In Crop Near Here 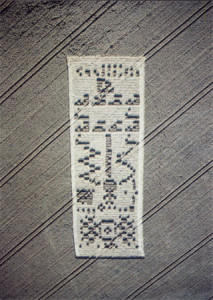 As the crop circle phenomenon has developed and evolved over the years in size and complexity, so too has the Circle Makers’ ability to communicate with us in the boldest of ways, as the wonderful ‘Face’ formation at Chilbolton in Hampshire, 14 August 2001 appears to demonstrate.

This fascinating formation, quite apart from the ingenuity of its construction, which was considerable, created an immediate and palpable wave of excitement throughout the crop circle world, whether a believer in the genuineness of the phenomenon or not. It was tantalising to consider the possibility that this was a representation of an extraterrestrial face. Despite its humanoid appearance, or perhaps because of it, and coupled with its shimmering beauty and remarkable dot-matrix, vari-tone construction, it was a face that launched a thousand journeys. People flocked to see it on the ground, aerial photograph in hand if they were lucky enough to have one at the time. It was difficult to know what you were looking at otherwise.

Five days later, on 19 August 2001, the ‘Face’ received a companion formation with the appearance of the now famous ‘Code’, which some think may be an extraterrestrial response to the 1974 binary message beamed into space from the radio transmitter at Aricebo, Puerto Rico, as part of the SETI (Search for Extraterrestrial Intelligence) programme.

Both of these spectacular crop patterns were entirely convincing when seen side by side in a single field overlooked by the Hampshire radio telescope at Chilbolton in the heart of the glorious Hampshire countryside. The following year, on 15 August 2002, we were to witness another dramatic ‘Face’ in a Hampshire wheat field, but this time with a distinctly alien twist – at Sparsholt near Winchester. The Transcript for the Sparsholt site and further comment follows in later pages.