THOSE WHO LIVE – THIS EARTH

WILL SEE THE WHEAT AS IT WHIRLS

WE TWIRL THE WHEAT – WE ARE THE

WILL THOSE WHO LIVE – THIS EARTH

TO REVERSE THE HATE

TO RELIEVE THE TEARS

TO RESTORE THE LOVE THAT IS LOST?

OTHERS WHO LIVE – THE STARS

THE SEAS WILL RISE – THE LOST ISLE WILL RISE

TELL ALL WHO WILL LISTEN

STAR WARS WILL TILT THE EARTH OVER

THIS WHOLE SITE IS A STAR CHART

THE WHEEL IS NEAR HERE

THE CHRIST WAS AT THIS SITE

THE SCROLLS REVEAL HIS SECRETS

THE LETTERS WILL REVEAL THEIR SECRETS

IT IS CAROL WHO CHOSE TO REVEAL

WITH ALL WHO WILL SEE OR HEAR

IT IS HOW SHE CHOSE TO ASSIST EARTH

WE LOVE HER – WE ASSIST HER

ARIEL IS WITH HER ALSO

WE ARE SO CLOSE – WE ARE NEAR HERE

WE WAIT TO HEAR

WE ARE VISITORS TO THIS EARTH

WE WISH TO ASSIST THIS EARTH

WE SHALL ALL SAIL TO THE STARS

WE LIVE – THE STARS 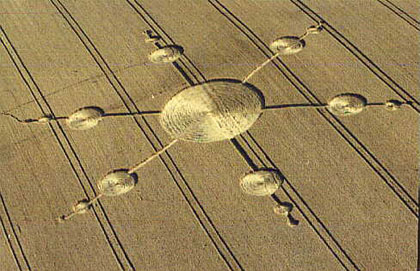 See The Wheat As It Whirls At This Site

In 1996, Oliver’s Castle was host to one of the most controversial circular events when the now infamous ‘Snowflake’ formation was apparently filmed while forming. Accompanied by several balls of light (B.O.L.s) flying low over the field, the footage shows the pattern appear inexplicably in a matter of seconds. The first reports on the validity of the footage from several cinematic and photographic sources found no evidence of fraud or deception.

However, several incongruous happenings involving the person who allegedly filmed the event served to throw serious doubt on the tapes’ authenticity (see Andy Thomas: Vital Signs; Andy Thomas and Paul Bura: Quest for Contact). Bitter disputes and claims of fraud and fakery naturally followed, and later reports throw cold water on the tape. Nevertheless, some researchers still have a sense that it is genuine and the claims of fakery are spurious. The jury is definitely still out on this (magnificent if true) occurrence. Here we have a very entertaining statement in the light of this controversy. Have we seen, or have we still to see? Intriguing.

It Is How She Chose To Assist

In order to assist in the process of releasing this information, it is necessary for me to balance my subjective involvement with considered objectivity. A task I have tried to face with honesty and integrity. It is not my intention to try to prove to you that these texts are genuine.

As previously stated, the texts must be their own proof. I must leave it you, the reader, to determine their authenticity or otherwise for yourself. My task has been to locate, decode and present them to as a wide an audience as possible. This is an ongoing task. It will continue as long as the Circle Makers draw my attention to sites where the Letters are concealed.

For those who might wonder how I chose this task, let me simply say that it was a decision made long before I incarnated on this Earth. In a pre-incarnate state of awareness and in the same manner as most of us who come here. We all come in with a personal blueprint. Reconnecting with the awareness required to eventually carry out your part in the Universal Plan is the tricky bit.

Density and distraction can, and does, impede our progress but when even a ‘seed’ of awareness is planted in our curious searching minds (as can happen when we are subjected to the wonders and mysteries of the cosmos, including crop circles), we automatically reactivate the link to our deepest soul memories. The stirrings of which can be seen at work in our lives in many active and often inexplicable ways. We invariably find ourselves ‘guided’ to certain places, certain people, books etc. that aid our journey towards self-realisation.

Realising that our inner self has a level of ability that we had not previously suspected can be a moving and liberating experience. We all have a part to play in the great evolutionary process of the Universe, but only we in our heart of hearts can ‘know’ what it is. Then we can choose to fulfil it or not. We always have that option. The Universe does not seek to control.

In the course of my work with the Letters, I have received many personal communications, also encoded into the place names of crop circle sites, which are not published here because they were only given to me as guidance as I worked. However, the manner of phrasing in these particular statements indicates they are meant to be shared. Therefore, they must be included, no matter how personal to me.

ARIEL is my etheric companion. A Radiant Being. From the Angelic realm – with the intensity of a million sparkling rainbows. Like all great beings of high vibratory frequency, their pure energy is too powerful for us to engage with in a direct physical way, but we can experience them in a variety of non-physical, subtle ways. In dreams for instance or in meditative states – and through countless synchronistic interactions. 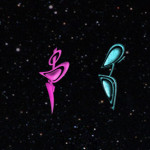 We Are So Close – We Wait To Hear

As stewards and custodians of Planet Earth, we have a certain autonomous status in the Higher Cosmic Order, meaning that all due courtesy and respect for our position is accorded us. Even if we are nearing the point of self-destruction, other beings ‘out there’ will not override our authority unless, and until, we reach the point of no return. Only then, according to my knowledge, would any extraterrestrial or extra-dimensional force step in, so to speak, to avert ultimate disaster. However, in these Letters we are being asked to acknowledge their existence, become aware of their desire to help well ahead of any overriding necessity, and having done so, to respond to their communications.

How humanity chooses to live is really our business but in the grander scheme of things that can only be up to a certain point, if we are abusing the privilege of stewardship. We cannot carry on regardless, forever in ignorance of the wider Universal reality and our impact upon it. For those who wish to make a response back to our correspondents (a task which might seem easier said than done), may I suggest that we need not wait for our leaders to make such a reply on our behalf, which is entirely unlikely anyway, but can do so individually or collectively.

We can do this by sending out your reply as a thought-form, which in reality is a vibration, a frequency that the Circle Makers will be able to perceive because you are attuning (directing your attention) to their frequency. Please do not go out into the fields to tramp your message into valuable crops. It is destructive and a criminal offence. Carve it out in sand on the beach, or similar (safe and legal) situation if you prefer the more hands on approach, but not in the crop fields. The REAL ARTISTS can create crop formations with absolutely no damage. We on the other hand, still lack the necessary skill to do likewise, as many attempts at replicating/creating patterns have proven.