ANOTHER STONEHENGE IN WASHINGTON STATE

ISIS AND OSIRIS SET THE TONE –

THE ONE NOTE IN THE STONES

THE ONE NOTE IS HELD IN THE

STONES AT THE STONEHENGE NEAR

ISIS AND OSIRIS ARE WITH THE NINE

NINE ARE AS ONE

IT IS THEIR WISH TO SING IN A NEW

WE SEE A GROWTH IN AWARENESS

WE WISH TO AID PLANET EARTH

WILL THOSE WHO RESIDE ON

THIS EARTH ALLOW THIS AID?

WE AWAIT AN ANSWER

A GREAT SEER IS ON THIS 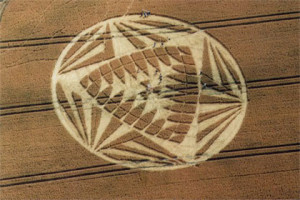 Allington Down near Devizes, Wiltshire, UK 1 August 2000
Photo by Steve Alexander
Here is an excellent example of how the repetition process works throughout this series. As we have already seen, at least one or more of these phrases are included in several other transcripts. The actual rate of repetition is a little higher in reality than I wish to convey here. It is vitally important in re-enforcing the integrity of this abstract method of delivery, but too much can be tedious for some when confronted with these Transcripts for the first time. Therefore as I mentioned earlier, I have chosen to edit out certain lines and phrases of particularly high repetition from some of them to allow the more conversational flow to dominate, as I believe is the Circle Makers’ wish.

Another Stonehenge In Washington State

Just as included in the Snake River Washington State transcript, this statement reaffirms this accurate fact. The purpose of drawing our attention to this fact may be no more than simply adding detail to the quality of the message. It is important to realise that the Circle Makers are the ones who are trying to convince us of their involvement with us through this phenomenon. It is a form of ‘contact’. An indirect one I grant you, but ‘contact’ nevertheless.

It is up to them to construct their series of associated Letters, with some hope of us being able to rationalise them or else it is an exercise in futility. The inclusion of ‘concrete evidence’ so to speak, like this statement and others we have seen i.e. SEE THE DNA AND THE ASTEROID ART … etc. are designed into the transcripts to help them offer something tangible. They know we require it. We are not creatures of blind faith. We need evidence.

From their perspective, the crop circles themselves are tangible evidence, and at one time it was considered so, but that has blurred into uncertainty due to the deceptive nature of certain human elements, who, in my view, have not served humanity or the Circle Makers by their actions.

We See A Growth In Awareness

Also seen in the Snake River transcript, this statement alludes to our collective awareness of their existence, or at least the potential for their existence. This can only be a good thing from their point of view. Waking up to a new Universal reality that includes the acceptance of, and contacts with, other intelligent living beings, whether interstellar, intergalactic or inter-dimensional, is our collective challenge.