THE WORM RETURNS TO THE DOWNS

WE SENT THE DRAGON OR WORM AS

ANOTHER HERALD TO ALERT OR

WARN THOSE ON EARTH

TO THE OLD WORLD ORDER

NO MORE USE TO HUMANS

HORUS – THE SON (of Isis/Osiris) RETURNS TO EARTH

SOON WE RETURN TO EARTH THROUGH

WHEN THE DRAGON TURNS TOWARDS

WE WONDER – DO HUMANS WANT TO

LEARN WHO WE ARE?

THE DOGON TOLD THE TALE

HUMANS SHOULD LEARN TO END THE WARS

NO WARS – NO STAR WARS

HEAR THE EARTH – HEAR HER

SET TO BE REBORN

NOW NO MORE THAN OLD SHARD(s)

BUT OLD SHARD(s) ARE REAL 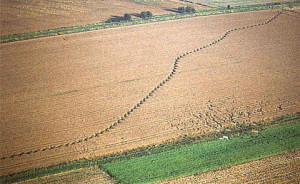 The Marlborough Downs are situated in the heart of crop circle country in the county of Wiltshire, a few miles north east of the ancient, sacred monument at Avebury. The county name is not included in this letter bar because it would have rendered the name outside the parameters allowed for successful decoding, giving it more than 15 separate letters and all 5 vowels. As you can see, in this case it was unnecessary anyway. The message had been formatted to fit neatly, within the alphabetical bounds of The Marlborough Downs.

My understanding of this particularly cryptic text is that the ‘Dragon’ of whom great tales are told, refers to what the ancient ones called Dragon Energy – a source of powerful Cosmic Energy as it flows through the Earth, and acts as the bringer of wisdom to the masses. Esoteric teaching pays great homage and respect to the principle of Dragon Energy.

The Worm Returns To The Downs

Several years ago, a friend and colleague, who is a prominent crop circle researcher, informed me that a very peculiar cerealogical event had just occurred in the wheat fields on the Marlborough Downs. It appeared to be an aspect of the crop circle phenomenon but could not be considered a conventional pattern or formation. Rather it was a strange, snaking, narrow line of flattened crop which was traversing its way across the Downs land from one field into the next with the appearance of a worm-like movement. My colleague, already aware of my work, requested that I decode this particular place name for any pertinent data, which might explain the mysterious appearance of this ‘worm’ or ‘dragon’ line on the downs.

The content of the message contained inside the place name serves to illustrate the pure ingenuity of those who send these messages by this method. A simple understanding of the significance of the symbolism of the ‘Dragon’ opens up the deeper meaning of the Circle Makers’ intentions – a return to a state of greater wisdom and responsibility.

When The Dragon Turns Toward The Sun

I am entirely grateful to my good friend for drawing my attention to this site. This is not one I would have wished to overlook as it carries within its decoded Letter, a vital, if entirely mystical, clue to the timing of our cosmic neighbours’ return. If anyone reading this book has the ability to interpret this statement, I would certainly appreciate hearing from you. I suspect that is has something to do with astronomical alignments. I would like to invite opinion/insight on this connundrum. If you have ideas on how a specific date or time period can be extrapolated from this statement and would like to share them, please use the feedback link above.

However, I have a theory about this statement – but it is only a theory. It may give an indication of relatively short period of time. It may be a bit of a stretch but sometimes we have to stretch to reach our goals. So I will include it here.

There are biblical references, in various verses of Revelation 13, and detailed by Ian Gurney in his book ‘The Cassandra Prophecy – Armageddon Approaches’ (published 1999), where St. John the Divine appears to describe the United States of America as the most recent ‘beast’ to rise up out the Earth and wreak havoc and destruction in its bid for world domination. This new beast is symbolised as the fire-breathing dragon (as in the case of Nagasaki and Hiroshima), masquerading as a lamb. John describes the lands of Greater Europe as the predecessor ‘beast’ giving way to the new one.

Therefore, if in this instance we were to consider the USA as the cryptic ‘Dragon’ of this text, then we can assume that the ‘Sun’ towards which it turns, may well relate to China/Japan/India. Certainly we can consider that it relates to Eastern countries, as opposed to Western countries.

So following this line of thought, an advance towards these countries by the USA, whether in an outwardly positive manner as is currently the case (depending on your point of view) in respect of trade agreements etc. or in a negative manner (potential for conflict), may be the sign the Circle Makers are referring to here. What is clear about this statement is that it relates to a time when the Circle Makers return to Earth. Other transcripts reveal that it will be sooner rather than later. 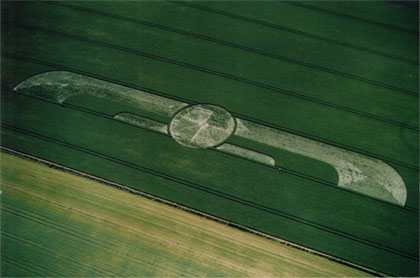 Horus – The Son… Returns to Earth

Horus, the son of Isis and Osiris, is the Falcon-headed Sun God of ancient Egypt, also known as the Hawk. Symbolic associations of Horus are the Eye of Horus, and the Winged Disc, amongst others. A lesser known association of Horus is the Horse, or White Horse to be more accurate. Representations of the first two associations, in the form of crop circles, the 1994 ‘Eye’ at Alton Barnes, and the 1999 ‘Winged Disc’ at Silbury Hill, become much more intriguing when viewed in light of the third association, the White Horse. The numbers of crop circles situated at sites of White Horse hill-figures in the UK is considerable.

Another Horian association is the Ring, the Solar Symbol (Horus holds the Ahnk, the symbol of life everlasting), and the further association to the crop circle phenomenon is so obvious that it barely needs mentioned. The Falcon is the symbol of resurrection, of rising from the dead, representing the state of Renewal. Horus’s connection with the crop circle mystery is clearly established by association, and is further confirmed in these communications.

With the inclusion of Horus in these Transcripts, we now have a very impressive trinity of highly advanced beings, The Mother, The Father, and The Son, re-united in our consciousness as symbols of transformation and renewal, and indicating their intention to return to Earth once more.

The Dogon Told The Tale Who We Are

Without doubt, the Dogon did indeed tell that tale. The Dogon are a uniquely interesting, mysterious North African tribal people, displaced from their original, ancestral home in N. East Africa, to their present location in Mali in N. West Africa. They have a verbal and pictorial history, maintaining a consistency of belief for millennia that they are the ‘descendents’ of beings from the Sirius star system – the Dog Star. Their knowledge of the Sirius star system was vastly more informed than scientific/astronomical knowledge in the latter half of the 1940s, when two anthropologists (M. Griaule and G. Dieterlen) lived with and studied the Dogon people for several years. The elders of the tribe were able, by drawing in the sand, to give a complete and thorough account of their knowledge of Sirius A, B and C, delineating the orbits of planets around the Sirian suns with perfect mathematical and geometrical accuracy.

This was at a time when science was still unaware of the existence of a Sirius B or a Sirius C. Later astrophysical studies of the Sirius star system confirmed the existence of Sirius B, when it was photographed for the first time in 1970 by Irving Lindenblad at the US Naval Observatory, confirming the accuracy of the Dogon’s record (see Robert Temple: The Sirius Mystery). The presence of Sirius C, (a small red dwarf star), was confirmed in 1995, by two French astronomers (D. Benest and J.L. Duvent). These scientific discoveries also confirm the accuracy of the Sirius information given by the Dogon tribe of West Africa in the 1940s.

Long Ago… Domes Sat On The Moon

It has been reported, as both fact and fiction, that NASA photographs from various moon missions, show signs of remnants (shards) of large, crystalline dome-shaped structures on the surface of the moon. Suspended above the moon, some 5 miles high, are remnants of what has been described as a ‘huge crystalline castle’. I have seen the footage, which purports to show these anomalies, and unless the footage is inaccurate or misinterpreted, there does appear to be several intriguing structural anomalies present, as in the suggestion. For further information on this, I refer you to the work in question (See Richard Hoagland; The Moon/Mars Connection. VHS 3hrs). Once again, however, the Circle Makers appear to have no qualms with our Earthbound controversies.