WE ARE NOT ALONE

THE LETTERS ARE HERE IN THIS AREA

THE ANSWERS ARE IN THE LETTERS

ISIS / OSIRIS ARE WITH THE NINE

THAT THE HATE THAT IS RISEN IN THE

EARTH IS LAIN TO REST

IT IS THEIR WISH THAT WE ARE WELL

ISIS WILL RESTART THE WHEEL THAT

WILL BRING THE RENEWAL

THE TONE – THE ONE NOTE IS HERE

IT IS IN THE STONES

THIS AREA IS A STAR MAP –

THE SEAS ARE RISING NOW

BE AWARE – TWISTERS TO HIT EARTH

TELL ALL WHO WILL LISTEN

NO WARS – NO STAR WARS

WARN ALL THE OTHERS

LIBERATE TIBET – IT IS ESSENTIAL

SEE WITHIN TO THE HEART

HEAR WITH THE INNER EAR 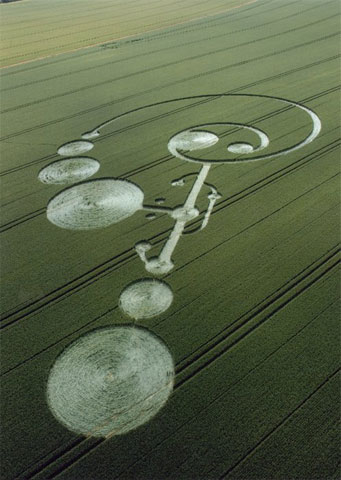 In the county of Wiltshire UK, Alton Barnes and the surrounding areas including Avebury, Silbury Hill and Stonehenge, are central to, and synonymous with, the modern phase of the Crop Circle phenomenon. Often referred to as the Wessex Triangle, many highly significant crop formations have graced the landscape of this sacred and historical part of southern England. 1990 saw the appearance of the Double Pictogram in the East Field at Alton Barnes, heralding a sea change in opinion, and generating a ground-swell of interest about the true nature of the phenomenon.

Thousands were drawn to the area, including press and media, to witness and marvel at the mysterious signs that lay before them in the fields. Pictures swiftly circulated worldwide. Questions and theories abounded. Answers, however, were more elusive, but the quest to find them certainly intensified as the circles developed from the simple to the more complex and abstract. Much has been written elsewhere about the significance of the placement of crop circles at sacred or otherwise geographically important sites (see bibliography). However, these Letters offer their own insights into why certain sites were chosen by the ‘circle-making force’, a fact that will become increasingly clear to you as you read them. The Letters for the most part are self-explanatory and speak directly to the reader; however there are certain abstract inclusions that need further explanation, certain lines or phrases where the meaning is less immediately obvious and many statements that simply deserve comment.

The purpose of these commentaries is to offer the reader as much insight into these abstractions as possible, according to my knowledge and experience. Whilst this is important, and necessary, of greater importance is that you have the opportunity to assess the content of these Letters for yourself. Therefore, my commentaries are merely to provide additional information, which may be useful in gaining a fuller understanding of the significance and implication for humanity that the Letters convey. Isis ⁄ Osiris The names of ISIS and OSIRIS, historically known to us as revered Gods of ancient Egypt, are central to the texts – repeating significantly throughout the series. In modern times, many associations of these great deities with Atlantis and the star systems of Sirius and Orion have been made (see Hancock & Bauval, The Orion Mystery).

In addition to the hieroglyphic record, specific accounts from the Dogon tribe of West Africa (see transcript: The Marlborough Downs), and channelled sources of information relating to ancient civilisations, cite Isis and Osiris along with other highly advanced intelligences as responsible for no less than the genetic ‘seeding’ of humanity itself (see Phyllis Schlemmer – The Only Planet of Choice). It is interesting to note that the names of Isis and Osiris are contained within the combined place names of Sirius and Orion, further confirming this very special association, in another unsuspected way. Isis – The Great Mother, goddess of ten thousand faces, is still as important and powerful today, viewed as she is by many as the embodiment of the feminine principle. Therefore we might conclude that her counterpart in Osiris is representative of the masculine principle, symbolically at least if not literally. So here we have their message to us today – created and encoded (into crop circle place names) for their specific purpose and relayed on their behalf by the Sirians, who claim to be their representatives. It is a lot to take on board, I know, however the only ‘proof’ I can offer you is that the Letters are genuine and do in fact originate from an extraterrestrial source are the Letters themselves. They can only be their own proof.

Clearly Isis and Osiris, stripping away all the mythologies surrounding them, were not ‘Gods’ in the perceived sense but rather manifestly physical entities that travelled to Earth many millennia ago with an immensely important universal task to perform. Sky people, as depicted and reported in the scriptures and historical texts of almost all cultures on this Earth, do appear, without exception to be of a highly advanced nature and have in my opinion been sadly and erroneously elevated to the status of Gods. Lesser deities perhaps, some of them, but most it seems were simply advanced beings from other worlds with the capacity to travel here – however that was actually achieved. The records show, nevertheless, that achieve this they did. In short, they came, they created and eventually they left – leaving us to our own devices, the consequences of which are all too obvious today. Now it seems they are announcing their intention to return to Earth once more. In what form is uncertain at this time, but if all of their apparent cosmic calling cards, e.g. crop circles, UFO’s, weeping statues, apparitions etc, are anything to go by then the one thing we can be certain of is that their actual return will be unmistakable. The Sirius Letters heralds that return, offering indirect contact, valuable information and advice as a pre-cursor to direct contact. 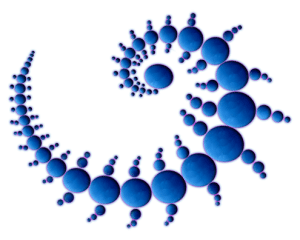 We Twirl The Wheat

This is a highly repetitive phrase throughout the transcripts. The Circle Makers appear to be in no doubt about their activities. However, it is important to note that they do not say they make all the circles nor do they say they don’t. There is clearly room to consider that some formations are man-made but whether the Circle Makers are involved in the majority or a minority of crop circles is not the issue in respect of these transcripts. Manifestly more important is the fact that through this ingenious method of communication the apparent identity of the real Circle Makers is revealed.

Despite all the mythologies surrounding the legendary islands of Atlantis, there are many allusions to this lost world in ancient historical texts and global folklore. A full historical account of Atlantis from its early colonisation to its eventual demise has been given by the great psychic Edgar Cayce who was able in a deep trance state to access the Akashic record – the collective unconscious mind where all knowledge is stored. In this state Cayce was able to observe and retrieve vast amounts of information about the place, the people and their technologies. He also maintained that Atlantis would rise again, the stirrings of which would be seen towards the end of the last century in terms of volcanic activity, earthquakes and new lands appearing in the Pacific and Atlantic oceans. New lands have been reported to appear in the Pacific and the Atlantic Ocean during the last 30 years. I do not have the geological expertise to offer a suggestion as to what mechanisms would bring about the re-emergence of the lost continent or even parts of it. However, the Earth changes Edgar Cayce predicted in 1934, which would accompany and herald this re-emergence of Atlantis, are very much in evidence today. 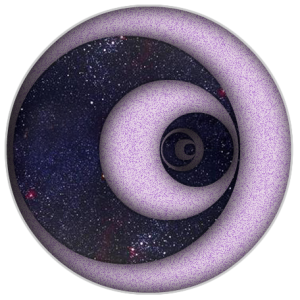 We Will Assist with Tibetan Liberation A powerful, explicit, and controversial statement from our Sirian communicants. Given the current politically-entrenched position held by the Chinese Government, in respect of Tibet and the lack of political will shown by most nations to assist the Dalai Lama in reclaiming the country for his people, its liberation seems far from imminent. One might conclude that nothing short of divine intervention is required to resolve the situation. However, according to the transcripts, intervention of a ‘higher order’ is clearly suggested. Only time and the unfolding of events (predicted or otherwise), will tell.

Raise The Trees – Raise The One Tree

In this one simple phrase, we have both a powerful physical message and an equally powerful spiritual one. As we are learning to our cost, stripping the planet of its living forests is a dangerous game, having a devastating effect on our whole Eco-system. Trees are the oxygen providers, the lungs of the planet, without them we cannot hope to survive. With more and more chemical pollutants pumped, sprayed, dropped, blasted or detonated into our atmosphere, we need trees more than ever, therefore massive global re-forestation is essential if we want to preserve life and maintain our stewardship, such as it is, of our planet. To RAISE THE ONE TREE, in the simplest of terms, is to raise the Spiritual Tree – the symbolic tree of life. It is an admonition to become fully aware of the inter-connectedness and inter-dependence of all life. Know that all is one in nature and the cosmos.